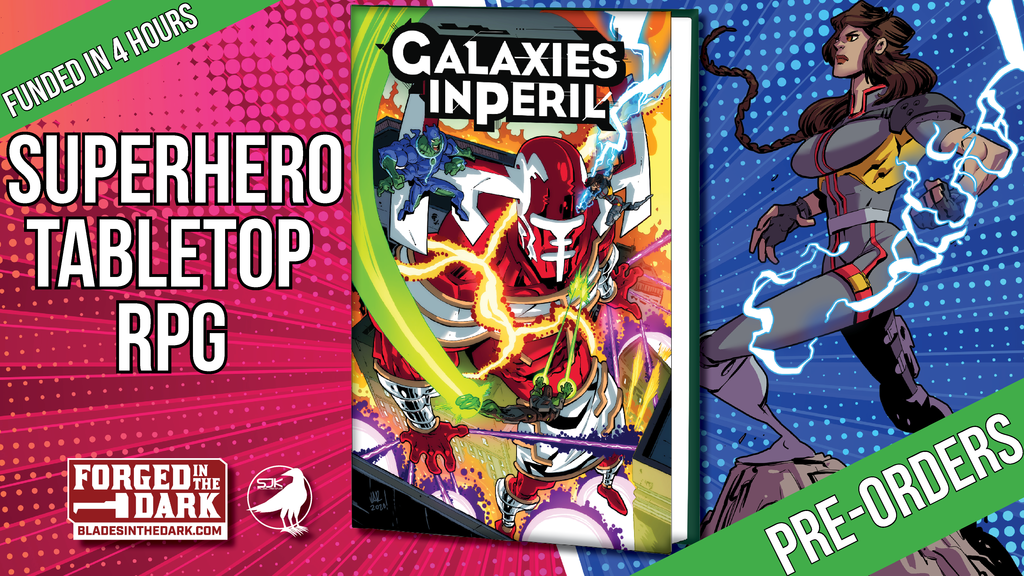 As to be expected, we did end up having a bit more pledge drops than usual - about 2%, which still doesn't seem all that bad considering the state of the world, especially at the time of funding, but is a good chunk of change.

It took me awhile and ate up way more time than I thought it would just to get the Backerkit set up (and I definitely won't be using a pledge manager again). On the plus side, though, that means that if you missed out on the kickstarter or would like to share the campaign around, there is now a way to do so and I'm hoping to both make up the Backerkit fee (3% of the total kickstarter) as well as dropped pledges as that would be ideal.

I used the kickstarter survey to get information from people who I needed info for up front—backers who went in for Worlds in Peril, or who pledged for getting a character of their making in the book. Because these characters need to go in the book I do need to hear from you sooner than later if you're at that tier, please respond to your survey or shoot me a message!

I thought I was being clever by writing the game within InDesign so I could noodle with graphic design and ideas for layout as I went, but I soon realized it was eating up a lot of my time when I should've been concentrated on just writing. Not to mention, I needed to send the text to Lauren for editing later and it would be cruel and unusual punishment to make her edit off a PDF. I used a plug-in to export all the text, but it corrupted my InDesign file. I did have a backup that I went back to and extracted the text from it manually but I ended up losing a couple chapters.

I ended up totally re-writing and changing up the final Setting chapter, though, and I think it's better for it. Before, I had the "Zero Day" of supers emerging set up back in the '50s and a timeline leading up to the present so that we had a very different present that looked somewhat analogous to a modern day Marvel or DC comic book thing going on.

Instead, on re-writing it, I decided to put Zero Day in the present (early next year) to make the game easier to pick up and play and to avoid that "samey" feeling you get when reading supers settings; Setting books are great for mining ideas, but I kind of hate running them as the canon setting either needs to be learned at the table or needs constant revision during play. By putting the setting at the present, you can sit down at the table and say, "supers have just emerged and the world looks like it does now, let's go."

One of the best parts about Blades, in my opinion, is how quickly you can get a game of it going—it's even faster than PbtA games in that regard because players (mainly the GM, sure) don't need to get caught up on basic and special moves. The core is there for any FitD games and you can just dive in with all those player-facing tools and making the setting something both implicitly understood (it's our world right now so let's play), and something unsure (what happens when supers start popping up and how are we going to have it change our world to look like a comic book world?)

Instead of all that stuff going down in the past we need to try to care about, I've got a timeline of the next couple years that players can use for inspiration for introducing new factions and NPCs or to incorporate events into their world via Faction Clocks or stuff going down in the background to help keep things feeling organic.

Because the setting stuff is interwoven throughout the game and mechanics, I've got to back through and change stuff up, but I plan to prioritize that so that we can get some playtesting going on while I'm cleaning and finishing all the setting information and how to present stuff in such a way that it also scales well for the players at the table.

Give me a couple weeks to get that done and I should have a playtest packet for anyone interested in kicking the tires!

Alright! We blew right past that main stretch goal to be able to put a comic in the book, as well as the other ones to make the game the best it can be. Thank you all so much!

It typically takes kickstarter about 2-3 weeks to collect all the funds, as they have a bit of a grace period during the first week I think it is to collect any failed payments and try to sort that out. Once the backer list is finalized I'll port everything over to backerkit and see about getting that all setup for backers who want to upgrade or add-on any books from our back catalogue.

I'm currently focused entirely on finishing up the game text, and I'm about 2/3 of the way through as of now. Once I'm finished the text, I'm going to hand it off to Lauren for editing and, while she does that, I'm going to prep the reference sheets so people can start playtesting.

Meanwhile, I've got Jonathan Rector, our amazing artist, already started on art that I know we'll need; namely the chapter openers, since I know those won't end up changing at all due to editing. Once he's done that, we'll start in on the comic since, again, it'll be unaffected by editing changes. Once Lauren's done editing we'll get the text off to layout so we can block in artwork and make it so it fits the page and the text properly.

I'll be posting monthly updates so that they'll be good sized and not so frequent that there'll be any "keepin' on keepin' on" updates; I expect the next one should have some chapter artwork and, with any luck, at least the announcement of the text completed, but ideally also some reference sheets for people to playtest and provide feedback on! I'm guessing we'll be able to have at least a month of playtesting and feedback before all the artwork is finished and we send it off to the printer.

Again, can't be said enough, thank you all so much for making this happen during such an unpredictable and unstable time. I was really apprehensive about launching a project and have been blown away by the response it's gotten.

We've hit a ton of them, and the value in the pledge levels continue shooting up nicely, if I do say so myself. The physical book is going to be both gorgeous and packed with awesome stuff; the digital levels are going to have all kinds of assets to use at your virtual table. So far, we've unlocked:

What I'd like to hear from you fine folk, is:

That said, I'm far more interested to hear what YOU want to see in the comic. What gets you excited about playing the game? What would it need to have in it so that you could hand it over to your friends and get them hyped to play the game with you? What mechanics of the game do you want to see brought to life in the comic?

Those stretch goals don't stand a chance! As I write this, we're closing in on the $18,000 level to add a sheet of stickers in with the book to go with the poster map, shrink wrap, and sewn binding we've already unlocked. Thanks so much for your support and my gratitude to any of you going the extra mile by sharing the project in your circles. I've added another stretch goal after this one to get spot UV on the cover and a ribbon bookmark in the book to really give the book that deluxe, premium quality.

I was also asked in a few places about how powers work and what the line “watching your character grow as they learn to use their powers in the fiction” line was all about. I wrote a bit about it on twitter and thought I'd share it here for those interested after this piece of amazing artwork by Jonathan Rector here:

The way powers work is that you’re assumed to be learning to use your powers from the beginning, so you’re not Superman yet, it’s more of a Smallville situation where you’re learning things as they come up in play - especially because things never go according to plan when you're actually in the heat of combat or stressful situations, it doesn't matter how many times you've practiced it at home.

You’ve got a summary of your powers on the left, which would be for a brief summary of your power set; so Superman would have quite a list of things like x-ray vision, heat vision, cold breath, super strength, flight, all that good stuff. In play, whenever you want to do anything that’s more than a normal human could do and there’s some element of risk or danger involved, you’d pay stress to use your powers as fictional positioning in the narrative, and then make an action roll like normal in Forged in the Dark games.

If you crit, you get to write it in under the appropriate category (from which you paid stress) and “learn” it. Once you’ve got it written down and you know how to replicate what you did in a combat or stress-heavy situation, you don’t pay stress to do it again in the future. Depending on the situation, a GM might have you spend stress regardless to use your powers to do something (even if it isn’t in a combat or stressful situation) to simulate you trying to learn how to use your powers, but every time you do, you get the chance of learning that action and writing it in so you don’t have to pay stress for it in the future.  In this way, you flesh out your character and their powers organically in play while always staying grounded in the fiction.

Of course, outside of powers you've also got all the great tools for advancement that players of Forged in the Dark systems know and love. You've still got improving your action ratings, building up and improving your HQ, acquiring new special abilities, as well as increasing the amount of stress you can take.